Getting back in the swing

In the most miraculous and cliche fashion, the upper respiratory thing broke through on New Year’s Day. Which meant I actually had to go on a “New Year New Me” run to start out the year.

Four frigid miles later – with a forgotten fuel belt and a horrified realization I needed to check in at my volunteer spot between 9-9:30 instead of 10-10:30 – I finally ran again.

So the good news is that I got my desire back pretty quickly. The ability is there. The speed is coming along, but since I’m not in training mode yet I’m not worrying about it.

I ran the last two weeks according the days I had scheduled, which I’m proud of.

However, my internal clock is struggling to get out of lazy winter mode. I don’t mind cold for my running, but there’s something about darkness and the lack of sunshine that makes it extremely difficult to get outside in the first place.

And on the flip side, I don’t want to run on the treadmill any more than I have to. Treadmills are great for time crunches and poor outside conditions – and I know once the first snow/ice hits I’m going to have to hop on the treadmill to get my runs in.

However, I think running inside in a controlled temperature made the illness worse before it got better. Stark cold outside air can sometimes make things difficult, but I haven’t noticed running outside prolonging anything either.

So the short ‘n sweet version is I’m battling seasonal laziness all over. I know I need to run and I’m ultimately going to do it, but my flesh is acting like a gigantic toddler who’d rather we stay inside with a long-haired cat, wear the fluffy white robe, eat dark chocolate and scroll Instagram all morning while reading critical comments of people we don’t like to reaffirm that we still don’t like them.

Now that I’m re-reading that, the cat part doesn’t sound too bad, but I’ve also just described this guy:

For the sake of making this funny, pretend Dr. Evil’s face is in here. Right now we’re the same shade of pasty. But I’m digressing.

Then there was the other challenge of getting back in the swing of running: the long run.

The last long run I can remember is the Indy Monumental on Nov. 9th. I didn’t go on a long run downtown again until Jan. 11. It wasn’t a super long run – 10 miles total – but I was nervous anyways. Mostly because I haven’t been on a downtown run in forever.

So last Saturday I slept in a bit and woke up to a pleasant day. Pleasant in this case means it was overcast, in the 50s and a far cry from what January in Ohio should be like.

Running in a t-shirt and cropped leggings was incredible. It was a little humid and sprinkled a bit during Mile 4, but otherwise I felt incredible during the run.

I took off west on Broad and zigzagged to Nationwide Children’s Hospital. From there I went through German Village to run the perimeter of Schiller Park.

I promised my boyfriend I would stick to city streets and decided to use my promise as an opportunity to run through the Brewery District to the Scioto Promenade along the river. 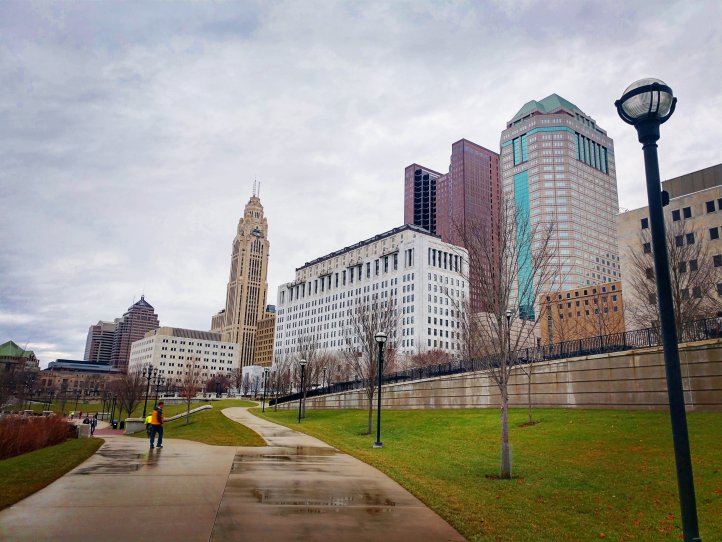 From the river I ran up hill in the Arena District to take Park Street to Goodale Park for a loop and then back down High and east on Gay Street to my car.

It’s been a long wait, but 2020 running started on a good, progressive note and I’m happy with where I’m going. Next on the agenda: getting my work day started.