I didn’t know if this past Sunday was even going to happen.

Last week/weekend was the Arnold Sports Festival, which includes two races on Sunday – the regular 5k and the Pump and Run 5k.

Then on Tuesday the news broke that the Arnold was likely going to be cancelled over coronavirus concerns and community spreading. For the non-Columbus people, the Arnold is one of – if not the – the biggest moneymakers for the city.

22,000 athletes were scheduled to come in from all over the world to compete. The expo brings in about 250,000 spectators, and according to my coworker, that weekend alone brings about five billion dollars to he city from hotel stays and eating out in the Arena District and Short North. It’s huge.

After talks with the mayor, governor and state health officials, as well as Arnold himself, the news announced on Thursday there would be no expo or spectators at the convention center. The only exceptions for spectators were the championship shows on Friday and Saturday nights.

My coworkers and I talked about the vendors and felt pretty bad for the vendors who paid 10 or 15 grand for a booth to have to eat the cost two days before the expo would kick off. There was also the issue of the restaurants ordering extra food and having to find out what to do with it.

Thankfully, a lot of the extra food was sent down to Nashville to help the first responders and tornado victims. So there’s a silver lining moment.

Meanwhile, I got the email from our race directors confirming the race was still on Sunday morning. The only notable thing to happen between the confirmation email and race morning was going “micro-viral” on Twitter for a picture I uploaded from my coworker’s Facebook of the Arnold statue with a face mask on. 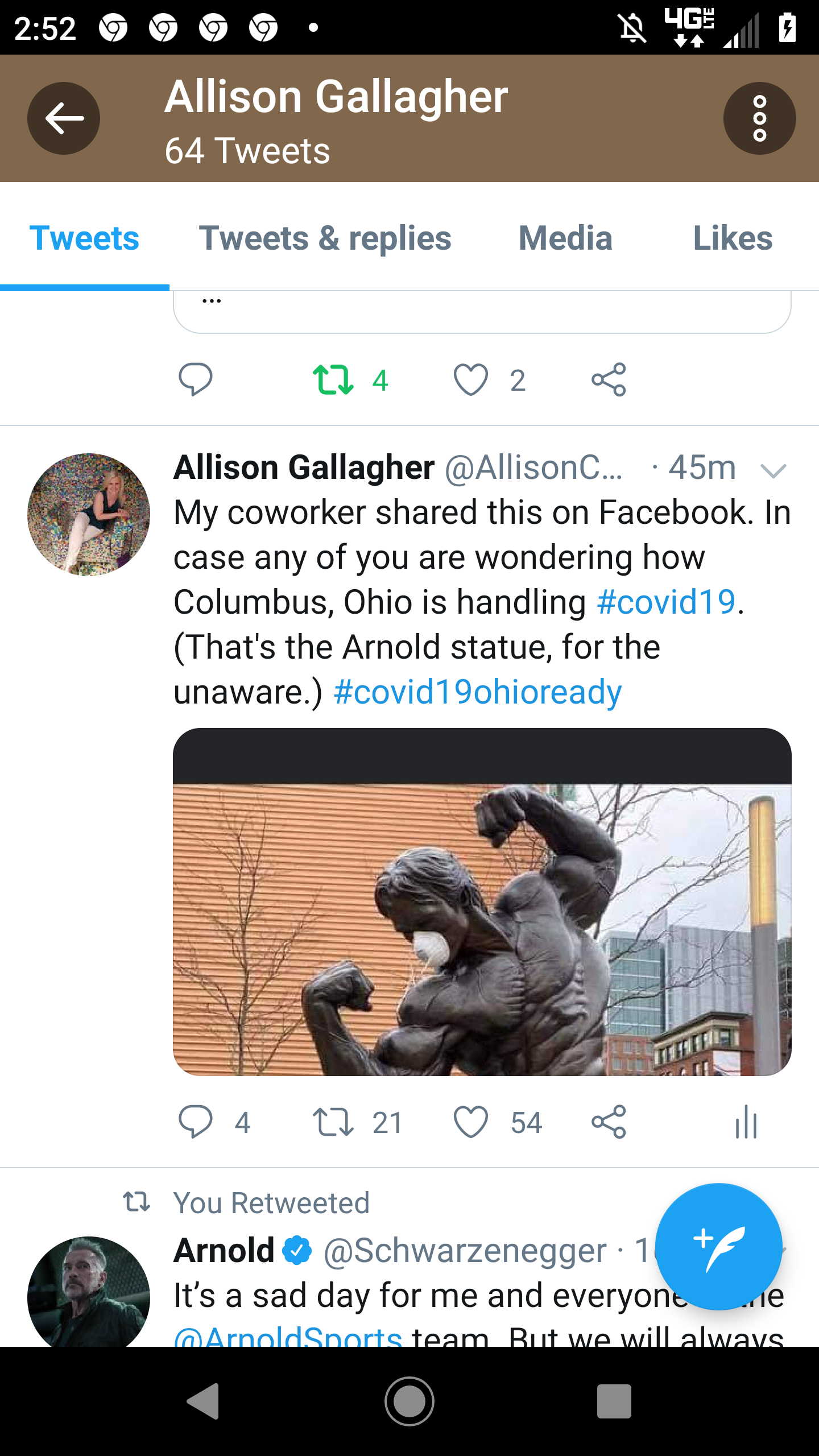 That tweet topped out at 242 likes and 69 retweets. Still only have 14 followers though.

Daylights Savings Time actually didn’t kill me like it has in years past. The sunshine was lovely, although that sunshine was very deceptive. It was damn cold on Sunday morning. My workplace is a little east of downtown, so I could have parked at work and walked to the convention center, but I decided to go ahead, park at the convention center and pay the two dollars.

Speaking of convention center – it was eerily quiet Sunday morning. Typically traffic and people are all over the place the week prior, so seeing a smaller group of runners, police officers and a few spectators over the course was strange. I got my picture with the Arnold statue, who was no longer wearing the face mask, and failed at recreating the Arnold pose so fantastically that it actually looked good. 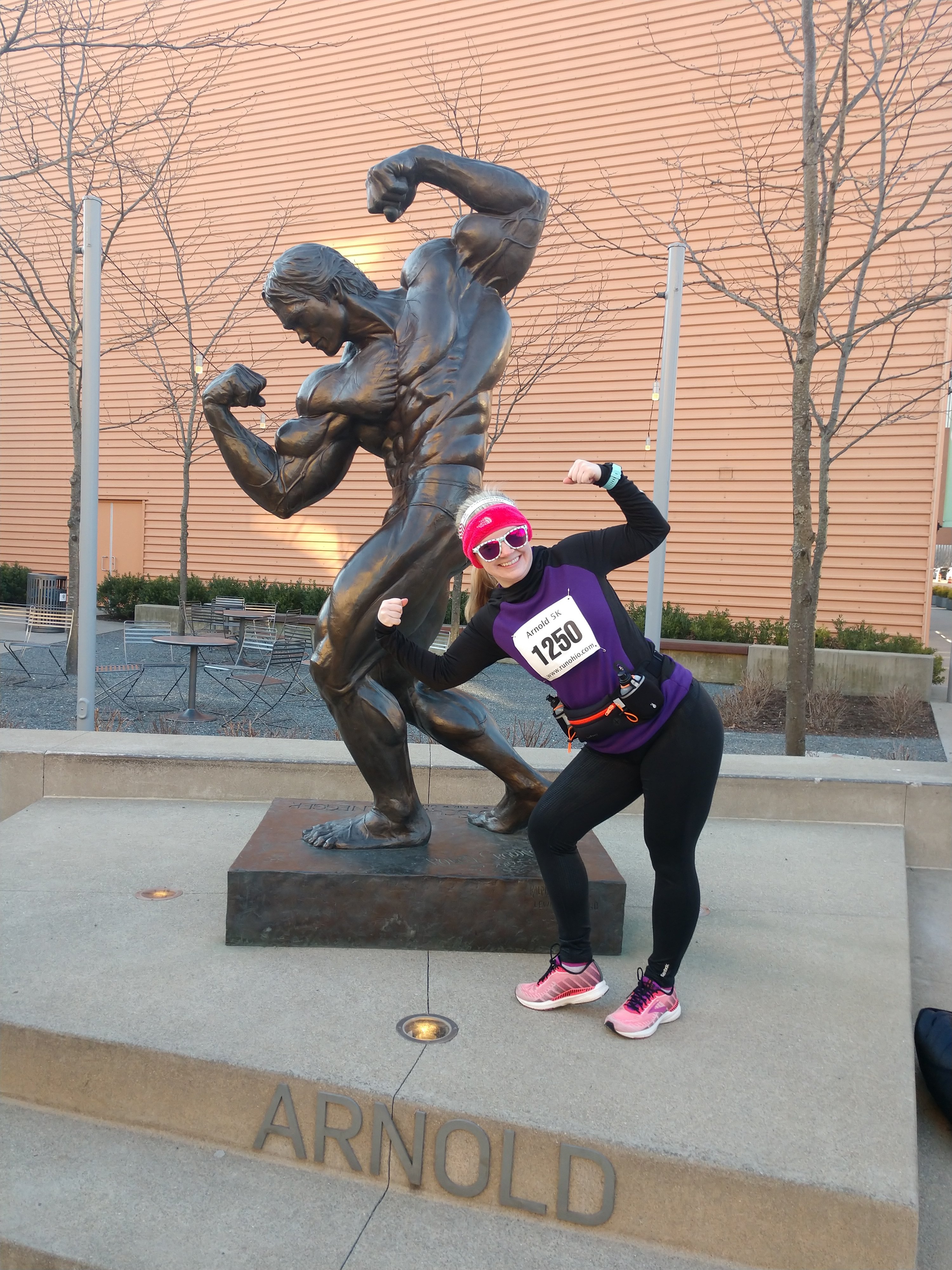 Then it was go time. Columbus is pretty flat, but whoever designed the course made sure to find all the inclines in River South and the Arena District. I felt great running High to Nationwide to Front Street in the first mile. During Mile 2 – Main or Rich to Marconi to Long – I had to take a drink break, but maintained my pace.

That last mile incorporated every hill in the Arena District. I walked more of that until we finally got over the hump on Nationwide Blvd. leading back to the convention center.

My final time – 28:57. I’m happy I ran 3.1 miles in under half an hour and didn’t realize until it was done and I got home with my medal (and Bob Evans family size macaroni and cheese for lunch) how badly I needed a race.

I hope you all had a great weekend and your week ahead is starting off on a productive note. Happy Tuesday.